Looking for a new vegan rice dish to add to your menu?

With this seven-ingredient recipe, you’ll have a healthy side dish or dinner (just add baked tofu) ready in less than an hour. Roast and puree the parsnips, cook the rice and veggies, and then combine the ingredients in a bowl…it’s as easy as that.

Not only is this rice pilaf vegan, it’s also gluten free. So it’s sure to work for anyone in your household.

Ready to learn how to make vegan rice pilaf? Let me show you how!

Vegan rice pilaf is fairly simple to make with just a few basic ingredients––including parsnips, olive oil, rice, and vegetable broth. Below are the ingredients you’ll need to create the vegan creamy rice:

Parsnips: You’ll need two medium parsnips. Before making the recipe, you’ll need to peel and cube them. You’ll then roast and puree them. This is what makes the rice pilaf “creamy” without any cream!

Olive oil: You’ll use this for cooking the veggies in the recipe. It adds flavor and healthy fats.

Brown rice: I used long-grain brown basmati rice to make this rice pilaf. The rice provides fiber, vitamins, and minerals. You can use any type of rice that you have on hand.

Just make sure to follow the instructions correctly to prevent the final dish from becoming mushy.

Vegetable broth: Low-sodium vegetable broth adds additional flavor to the dish. You’ll use it to puree the parsnips and cook the rice.

Onion and bell pepper: I’ll use any excuse to add extra veggies to a recipe! Don’t have onion or bell peppers on hand? No problem––you can add any veggies that you like to this recipe.

Almond slices: Blanched and crumbled almond slices are the perfect topping for vegan rice pilaf. They add crunch as well as protein and healthy fats!

There are a few tools that you should keep on hand for making rice pilaf. These items make it much easier to whip up:

Chef’s knife: Use a quality chef’s knife to cut the parsnips, onions, and bell peppers!

Nonstick baking sheet: This are perfect for roasting vegetables.

Oil mister: You can use an oil mister to spray olive oil over the parsnips before roasting them.

Rice cooker: A rice cooker will cook your rice and other grains to perfection!

Roast parsnip cubes: Start by preheating your oven to 425° Fahrenheit. Spray a cookie sheet with cooking oil spray, and place the parsnip cubes on the tray.

Drizzle with 2 teaspoons olive oil, as well as salt and black pepper to taste. Cook for 30 minutes, or until they are tender and golden brown.

Give them a toss halfway through to make sure they cook evenly on all sides. When done roasting, take them out of the oven and allow to cool.

Cook the rice: While the parsnips are roasting, cook your rice according to the package instructions, using 1 ½ cups vegetable broth and 2 teaspoons olive oil. You can cook it over the stovetop or by using a rice cooker!

Saute onions and bell peppers: As the rice cooks, saute the onion in ½ cup vegetable broth over medium-high heat, while stirring occasionally.

When the onion appears translucent, add the green peppers and cook until almost all of the liquid is absorbed. Remove from the heat and set aside.

Puree the parsnips: Once the parsnip cubes have cooled, mix them with 1 Tablespoon vegetable broth. Puree them with a food processor, and then place the pureed mixture in a small bowl.

Next, mix in 1 tablespoon vegetable broth. Combine the parsnip rice mixture with almond slices and the other veggies. Add salt and pepper to taste. Garnish with your favorite herbs, like thyme, if desired.

How long does long-grain brown basmati rice take to cook?

It takes approximately 15-20 minutes to cook. If you’re in a time crunch, you could use instant rice for this recipe instead.

Can you use white rice instead of brown rice?

I recommend using brown rice over white rice, as brown rice is higher in fiber, vitamins and minerals. It is also slightly higher in protein compared to white rice. However, if you only have white rice on hand, you can certainly use it in this vegan rice pilaf recipe.

Can you freeze rice pilaf?

Yes, you can freeze rice pilaf. Allow the pilaf to cool after making it.

Then, place it in a freezer-safe container or bag. It’s a good idea to separate out the pilaf into individual portions––this will make them easier to reheat. Label the containers with the date, store them in the freezer, and enjoy within 3 months.

Why is my rice pilaf mushy?

If you use too much liquid to make the rice, it will stick together and become mushy after you cook it. To prevent this from happening, make sure to follow the instructions on the package and only use the amount of liquid that it suggests.

You can also rinse the rice after cooking it. This will remove the extra starch, which is ultimately what causes it to become sticky.

What variations can you make of vegan rice pilaf?

There are many different ways you can adjust rice pilaf to make it your own. Try it with different vegetables, like green beans, broccoli, peas, cauliflower, mushroom, or carrots. You can flavor it with any spices and seasonings that you like.

Additionally, you can add tofu, edamame, beans, or lentils to vegan rice pilaf to make it higher in protein.

What can I serve vegan rice pilaf with?

It’s commonly served as a side dish with a protein and vegetables.

Try it along with grilled or roasted veggies, or a side salad. If you eat dairy, you could top it with some cheese crumbles. If you add more protein, such as tofu, this rice pilaf can be eaten as a meal on its own.

This rice pilaf with parsnips is naturally vegan, as it does not include any animal-based ingredients. You can make the recipe higher in protein by adding tofu, edamame, beans, or lentils.

Did you love this vegan rice pilaf? Take a look at my other healthy rice recipes:

Whether you’re looking for a new rice pilaf dish to make for dinner or meal prepping for lunch, this vegan rice pilaf is your answer for an easy healthy meal.

It’s tasty, nutritious, and gluten-free, so is sure to be a crowd pleaser for anyone that you share it with. Give it a try and let me know what you think! 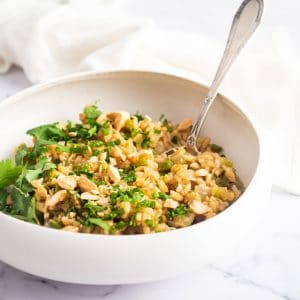 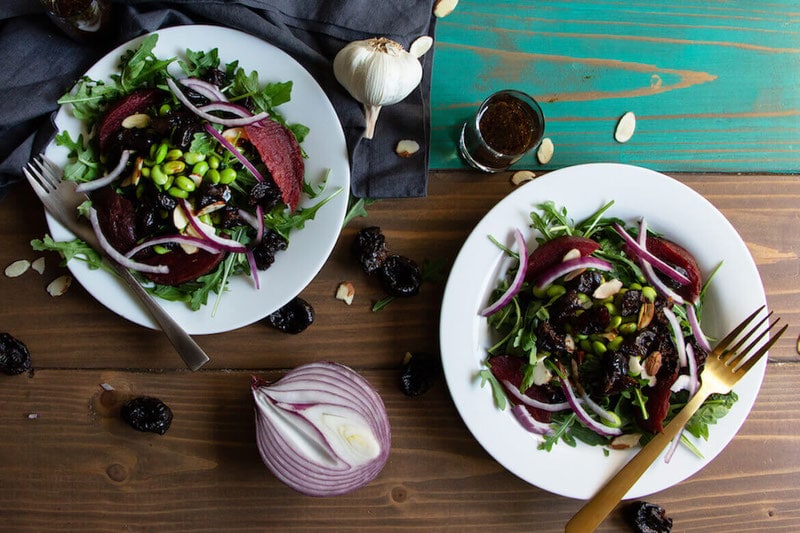 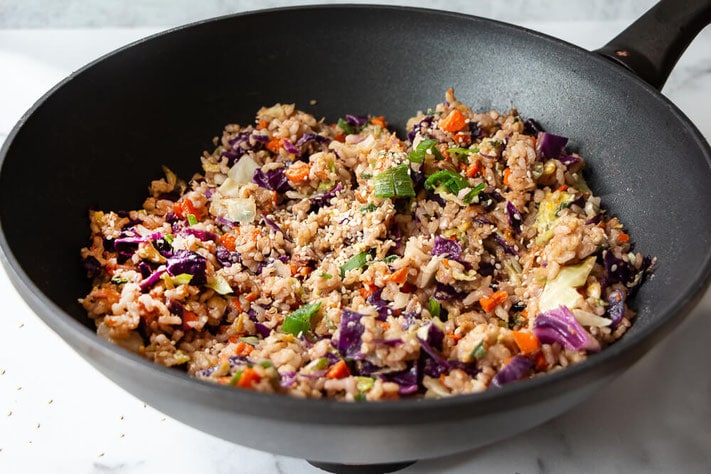 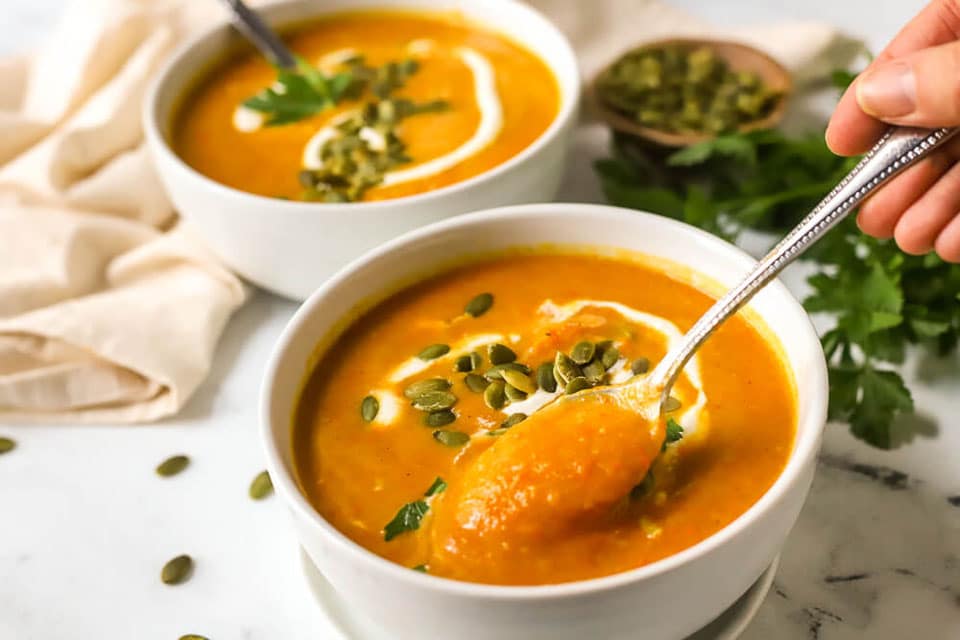