This French toast with Greek yogurt and apples is as delicious as it is easy to make. Plus, it packs in a punch of protein!

This Greek yogurt French toast recipe is protein rich and topped with sweet sliced apples and pecans. It’s the perfect sweet breakfast with a healthy touch!

How to make a healthier French toast

French toast can be high in calories, sugar, and fat––and is typically made with white bread, which is low in fiber. While it’s okay to have decadent French toast like this every once in a while, it is a good idea to find healthy alternative like the recipe that I’m about to share with you.

Here’s what I did to make this French toast healthier:

Use an entire egg and egg white

Each serving of this French toast with Greek yogurt contains one egg and one egg white. This is a big part of what contributes to the breakfast’s incredible 21 grams of protein.

The addition of apples and pecans to this recipe bring extra nutrients, fiber, and healthy fats. You can use any fruit that you like as a topping––bananas, berries, or peaches would be delicious. Using fruit as a topping allows you to skip the sugar syrups!

Use Greek yogurt as a topping

Greek yogurt is creamy and moist, just like pancake syrup. But the plain version doesn’t have any added sugar. I used 2% fat plain Greek yogurt, but you can use the fat-free version if you prefer. The yogurt also adds protein to the recipe, which French toast is often lacking.

The combination of healthy carbohydrates and protein in this dish make it a balanced meal that will help keep you full and satisfied all morning long. I recommend having French toast with Greek yogurt as a nutrient-rich and delicious breakfast!

This French toast comes together with give pantry staples, plus toppings that are super easy to find in the grocery store. Here’s a list of everything you need to make this meal:

Whole-grain bread: This is the type of bread I used to bring some extra nutrition and fiber to the French toast.

Cooking spray: You just need a little for the pan. I used this instead of butter to reduce the amount of saturated fat in the recipe.

Egg/egg white: You’ll need just one egg and one egg white for the French toast batter.

Vanilla extract: This brings extra flavor to the recipe, without the need for added sugar.

Apple: You can use red or green apples. Just slice and cook them before adding them as a topping to the French toast.

Cinnamon: Add just a little cinnamon to taste at the end for a flavor boost. Because the spice is naturally sweet, you won’t need to add any sugar.

Here are some items that will make whipping up French toast even easier!

A small bowl and a small whisk: You’ll need these to beat together the egg, egg white, and vanilla extract.

Two small nonstick pans: Here’s what you’re going to use to cook your French toast in, as well as your diced apples. If you have an induction stovetop like me, make sure your pan says that it’s induction friendly.

Oil mister: This isn’t necessary. But if you want to cut down on waste, you can refill this with olive, avocado, or grapeseed oil—instead of buying and tossing cans of spray oil.

Silicone spatula: You’ll use this to flip your French toast over.

This French toast breakfast recipe is so easy to make! Here’s how to whip up your very own French toast with Greek yogurt.

Make the egg mixture: Start by mixing together the egg, egg white, and vanilla extract in a small bowl. Before moving to the next step, coat a small non-stick pan with spray oil.

Cook the apples: While the bread is cooking, coat another non-stick pan with spray oil. Pan-fry the sliced apples until they’re cooked through.

Serve: Once the French toast is browned, transfer it to a plate or other serving dish. Top with apples, pecans, and a dollop of yogurt. Sprinkle with cinnamon and any other desired toppings. Then, enjoy!

Not only is this French toast super delicious, it’s full of nutrition from the Greek yogurt, fruit, and pecans! Here’s how the breakfast’s nutrition stacks up:

The best bread for French toast depends on your preferences. The breakfast is commonly made with brioche, challah, sourdough, French bread, or plain old white bread. I used whole-grain bread to make the recipe healthier and higher in fiber.

How can you make this recipe gluten free?

How can you make this recipe dairy free?

I recommend choosing a vegan yogurt that boasts protein. So that means coconut yogurt is out for this one.

How can you store leftovers?

To do so, place a piece of wax paper between each slice, then store inside aluminum foil, a freezer bag, or another freezer-safe container. Enjoy within one month for the best quality. Whether you are refrigerating or freezing, add your toppings after you defrost the French toast.

Wondering how to make French toast vegan? There are just a couple of tweaks you have to make for the recipe to be 100 percent plant based. Here are some ideas:

Swap out the eggs

Instead, you can use an egg substitute. Try making a flax egg with 1 Tablespoon ground flaxseed and 2 ½ Tablespoons water. Combine the ingredients in a small bowl, and stir. Let the mixture sit for about five minutes to thicken.

Swap out the Greek yogurt

While Greek yogurt is a key ingredient in this recipe, you do not have to use it. You could use a plant-based yogurt to keep the creaminess or just leave the yogurt out all together.

This French toast is absolutely delicious. It’s packed with nutrition and is high in protein, making it a satisfying breakfast. Plus, it’s easy to make and store––you can make a big batch to have on hand for busy weekday mornings or save it as a special weekend treat.

Give it a try, and let me know what you think! 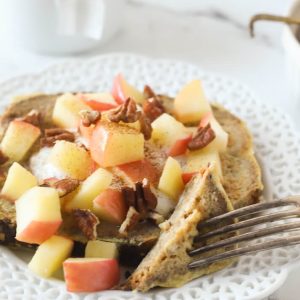 This French toast with Greek yogurt and apples is as delicious as it is easy to make. Plus, it packs in a punch of protein!
5 from 1 vote
Print Recipe Pin Recipe
Prep Time 5 mins
Cook Time 10 mins
Total Time 15 mins
Course Breakfast
Cuisine American, French
Servings 1
Calories 370 kcal

It’s so nice to meet you! I’m a registered dietitian nutritionist in the New York City area. As a longtime vegetarian and now pescatarian, my focus is in inclusive plant-based eating. My goal is to get everyone eating more plants—no matter if you’re vegan, vegetarian, flexitarian, or just plant curious! I want to make plant-based eating easy for you.
2 Comments
Join The Conversation 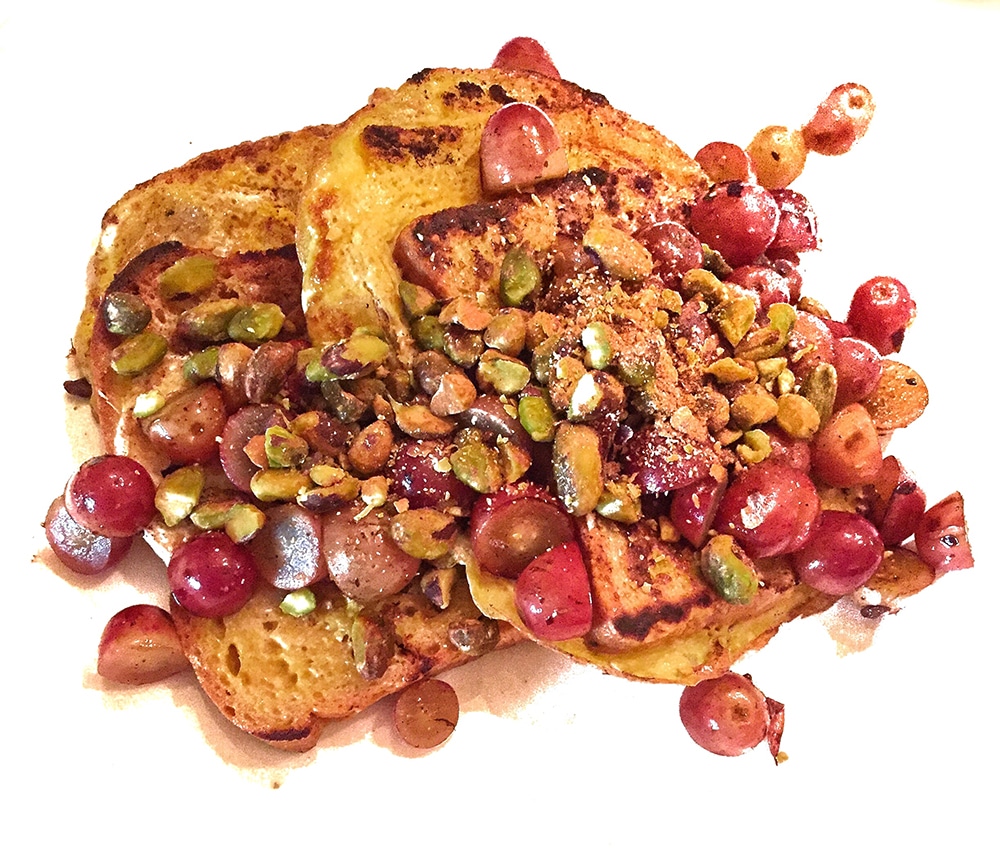 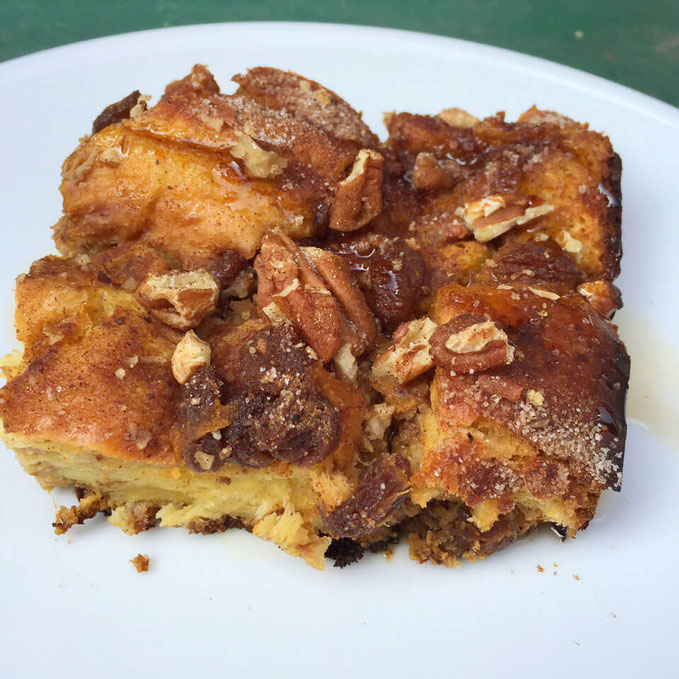 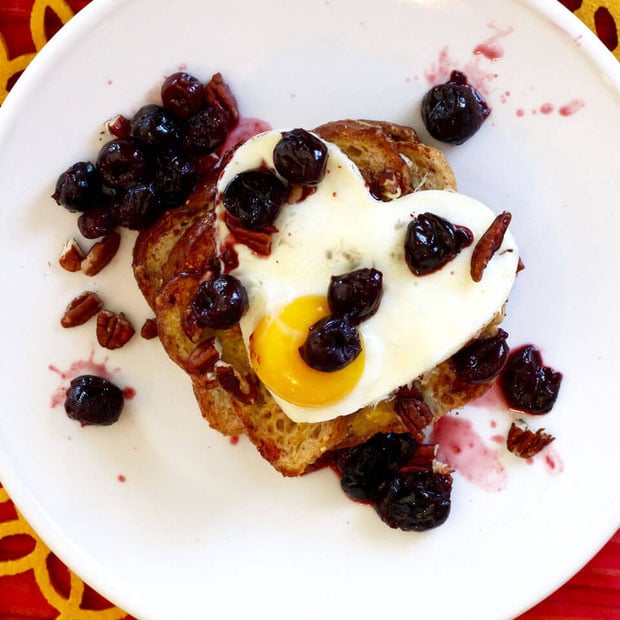 You guys went crazy for my last giveaway with @ano

It's been awhile since I've given you an update on

Hey you guys, it's summer so why not celebrate wit

You guys, I have another amazing giveaway to share

Do you love a quick, easy, and healthy breakfast j

EXCITING NEWS + GIVEAWAY! 🎉🎉 I am so excit